It’s Monday morning in Amsterdam and the five year old doesn’t have school. The reason for this isn’t entirely clear – the day off applies only to kids aged 4-6, in Groups 1 and 2. Our big two children, aged 8 and 10, still have school, so any usual Day Off Advantages are nullified; we still have to get up and dressed, still have to make packed lunches, still have to hiss at the children to keep it down to a dull roar so we don’t wake our neighbours, who sleep directly below our dining table. Amsterdammers live in a big pile and pretend to be mostly cool with it, unless anyone does building work.

The five year old lords it over the disgruntled big two at breakfast.

“I’m going to Candy Castle,” he says, for the sixth or seventh time.

“I hate Candy Castle,” says the ten year old. This is fair enough. Candy Castle is a soft play seventh circle of hell, built, ironically, in a large old church. Every child between the ages of 4 and 6 celebrates their birthday in Candy Castle, and leaves red-faced, dehydrated, habouring previously unfamiliar bacteria and craving salt. I think we’ve all been there. Some of us more recently than we’d prefer to admit.

“It really isn’t fair,” says the eight year old. She is having a hard time, the eight year old. One of her best friends is about to leave Amsterdam for Haarlem, to live in a house where they don’t have to whisper at the breakfast table. The eight year old has been the one to leave, and now she is the one who is left. The hazard of living in a big city is that you’re surrounded by flight risks. You have to spread your bets. You never know who’s next.

“Will those girls be there?” says the five year old to me.

I followed him into the soft play, holding my sleeve over my mouth, breathing shallowly. The five year old was a way ahead of me, so Those Girls did not see me as they launched themselves at full throttle into my son, who fell back onto to his bottom with a kind of resigned inevitability. Those Girls also did not register their own carer, who happened to be passing.

“Oh gosh!” I exclaimed, which is British for you fucking little shits! My defenseless baby! You savage, ignorant brutes!

“Oh dear!” said the carer of Those Girls, who, at the sight of adults, froze. The five year old was still sitting on the floor looking up at us with his big Eeyore eyes.

“I don’t think they saw him,” said the carer.

Those Girls remained frozen to the spot. Eeyore too, behind them on the floor, hearing everything. Here was a pivotal moment. A fork in the road. A small child’s voice within me whispered, “Just say never mind. Just smile and let’s get out of here. If we don’t acknowledge it, then it didn’t happen.”

“Actually,” I said, “I came down here with him because he said they’ve pushed him a few times.”

“Really?” said the carer, looking at Those Girls. Those Girls immediately burst into tears.

I mean, it was the right thing to do! I had to show my child that I was on his team! And it would have done Those Girls no favours to have let them get away with it! I might have been the fork in the road for Those Girls; no longer were they headed towards bullying, gang membership, drug dealing and murder. They learnt something that day; that the truth will always out. I was just karma in human form. A vessel for justice.

“They are in trouble now,” said the five year old, holding on to my hair, as he has done since he was a baby; weaving little fingers through my knotted curls.

Those Girls stayed with the five year old.

“I hope they aren’t there,” he says again now, on the way to Candy Castle.

“They probably won’t be there,” I say, “and if they are, remember that they learnt a lesson about how to treat people last time.”

YOU BET THEY LEARNT A LESSON, I think. DON’T MESS WITH THE AMSTERFAM! NO SIX YEAR OLD IS A MATCH FOR ME!

“I think they are at my school,” he says.

‘They’re not at your school,” I reply.

We get to Candy Castle and Those Girls are not there. At least, not in physical form. But they follow us all around, don’t they? Those Girls. I knew them too, when I was a child. I remember, aged 7, sitting on a bench for an entire break-time, after Those Girls had told me that they would meet me there to play. I told myself that the whispers coming from around the corner of the school building behind me were just the wind. The giggling that I could hear behind the nearby wall, well; that must have been a different group of children. I sat and waited, as instructed, scanning the playground for Those girls, knowing full well that I would not see them. The giggling and whispering behind me continued until the bell rang. Back in the classroom, Those Girls pre-empted any attempt that I might make at accusation by making their own:

“We couldn’t find you,” they declared. 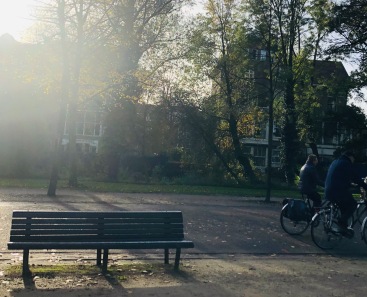 A few days later, My Lawyer and I find ourselves at the theatre, courtesy of Actors Anonymous, who have sent me tickets to their play God of Carnage. They have sent me these tickets because I am Tulse Hill’s most popular export in Amsterdam, and you want people like that at your premiere. I’m a mover and a shaker. Although I do have to be at home by ten-thirty because our babysitter has school the next day. I shake and move mostly in daylight hours, when my children don’t have inexplicable days off school.

We dither about hanging our coats up, and decide to keep them with us. It’s cold outside and we prefer to stay buttoned up, thanks. We take our seats, annoying our neighbours with our huge winter coats; we make wide Wallace-and-Gromit faces as we say sorry, to show that we really mean it.

“What is this play about?” says My Lawyer, finishing a work email.

I google, and recite: “’A savage comedy that tears away the veneer of respectability in modern bourgeois lives to expose the bigotry, anger and predications that lie beneath’.”

My Lawyer looks up from his phone. “Huh?”

The lights go down, and the play begins. Two sets of parents meet to discuss an incident between their seven year olds, in which one child hit the other in the face with a stick. The parents of the attacker are corporate arseholes; the father does not stop taking work calls during the meeting. Imagine! The parents of the victim are champagne socialists; unbearable on their moral high ground, revelling in their son’s victim status. Occupations are revealed: the corporate arsehole father is a lawyer, and the champagne socialist martyr mother is a writer. I start to sweat a little. It’s warm in here, isn’t it? Anyone else feeling a little heat? The flames of recognition licking a little close? Perhaps I should have hung my coat up after all.

The meeting descends into chaos, of course; far beyond the passive aggression that any parent might recognise from their own experiences of diffusing childrens’ altercations. The parents drink heavily, throwing insults and, eventually, objects. They cast accusation and judgement upon each other with the same mindless abandon as a child with a stick. It is awkward to behold, of course, but also slightly wondrous; what would it be like to unburden yourself of the shackles of adult propriety? To act with primal instinct? To do or say something as a child might?

You’re parenting yourself when you parent your kids. You have just one first-hand account of childhood that you’re stuck with for the entirety of parenthood. We should all try and remember that. Google thinks that it was Erich Fromm who said, “the main condition for the achievement of love is the overcoming of one’s narcissism.” We should make efforts to step outside of ourselves. We should empathise. We should forgive.

Or, we could tell on a six year old and blog about it.

That will show them.

That will show Those Girls.

God of Carnage is showing at the Perdu Theatre until 30 Nov. You can get tickets for God of Carnage here and for more updates about English language theatre in Amsterdam, follow Actors Anonymous on Instagram and Twitter.