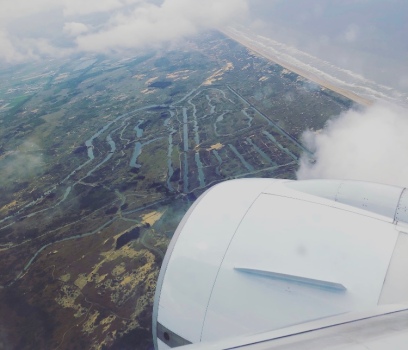 When we buggered off out of London nearly two years ago to go and live in Amsterdam because we were fed up of not having a parking space on our street (why else would anyone leave London?), I thought that was it for goodbyes. Each farewell was painful in its own unique way, and I worried about carrying the weight of each loss around a new city, in a new country, in a new language. It’s like ripping off a plaster, people advised. You’ve just got to get on with it. They were right; that is, if you imagine a plaster that has fused to your skin, so that when you tear it off, a good chunk of your flesh comes off with it, which remains in your home country forever, being chewed by rats, pecked by magpies and trodden on by commuters running for the 0753 from Tulse Hill. That train was always late. God, I miss London.

Where was I? Right! Saying goodbye! We said goodbye, we cried, and then we got on with the next helping of anxiety; meeting new people, language acquisition, ignoring weird tics that the kids developed following their traumatic upheaval. Saving up any extra earnings for future therapy. Standard stuff.

What we did not expect was more goodbyes.

Eight months after we arrived in Amsterdam, we said goodbye to our best friends, American Family. American Mom’s job was moving to Panama City, and they left us their plants, their lamps with European voltage and a gross bloody plaster – a BANDAID, to them of course – sticky with raw American flesh. I mean, I don’t know what to do with this thing. I don’t think you can just throw it away.

But! What is the silver lining of friends moving away? New holiday destinations! Fast-forward a year from American Family’s departure and the Amsterfam are going to Panama!

I’m a little nervous, of course. Living with another family for two weeks – is that going to be tough? I have a hard enough time living with my own family. As the date approaches, My Lawyer obsesses more about the work that he will not be doing. This holiday, like all holidays, has come at a bad time, workwise. He packs his computer, and then unpacks it, and then packs it again. Dread, regret, resignation – the holy trinity of British family holiday preparation. We’re as ready as we’ll ever be. I pack two books: Alice Munro short stories and a Dutch translation of Lena Dunham’s college diary. If a tropical holiday isn’t the right setting to struggle through a millennial’s privileged, unpunctuated introspection, then I don’t know what is. I open the book on the plane:

-European men don’t realise how intimidating they are.

Half a day later, we arrive in Panama City.

The American Family meets us at the airport. We reacquaint ourselves with each other as long-lost friends might after an eleven hour plane ride: listing the films that we watched on the plane: A Star Is Born (Bradley Cooper gets sexier as he gets drunker), The Favourite (Emma Stone fingers Olivia Coleman – perhaps not the smartest plane-film choice, I decided, with a Panamanian Granny to my left and the five year old to my right), and Can You Ever Forgive Me, which I tell The American Parents they would love.

“Don’t watch it,” he instructs, “until after this holiday.”

This is what we do with American Family. We tell each other what we should watch and read. We spout forth instructions and don’t give a shit whether or not these instructions are followed. This is how we know we are at ease with each other – we can tell them what to do, and they us, without consequence. We don’t worry how it sounds, or how interested we have to appear to be. The better our friends are, the less effort we’ll make; apart from, of course, flying 9000km to see them.

We get back to their apartment, on the twenty-third floor, overlooking the ocean. It is some day, some time; we’ve given up keeping track. Smells from the kitchen tell us that it’s nearly dinnertime, and a new face emerges, smiling.

The Maid wears normal clothes; leggings and a t-shirt. The American Family does not insist, as some other families do, that The Maid wears a uniform. She sleeps in a room on the other side of the kitchen at the back of the apartment. Perhaps it is this proximity to her living quarters that makes me feel that I’m intruding in her space when I’m in the kitchen, or perhaps it’s because the kitchen is her office. Either way, on our first morning, I’m standing awkwardly in the doorway waiting for her, under instruction from the five year old to get him breakfast.

“Just tell her what he wants,” says American Dad.

The Maid reappears in the kitchen. I feel like a child the morning after a sleepover; this isn’t my mum, this isn’t my kitchen, and I’m definitely going to inadvertently ask for something that she doesn’t have. I try to think of something simple.

“Please may he have Weetabix?”

She looks puzzled. I panic and look at American Dad, who, as the stay-at-home parent, I designate as In Charge Of The Pantry.

“Pancakes!” says the five year old. He has no problem giving instructions.

“Pancakes,” nods The Maid, smiling at the five year old.

“Got my Doggy,” he says to her, holding up his bio-hazardous blue rag. He has no idea who The Maid is. He has no idea, outside of his own family, who anyone is. I hope he’s making the most of it.

It is the weekend, so the American Kids don’t have to go to school. We lounge around at the building’s private pool. I explain how awkward I felt with The Maid at breakfast.

“Do you know what you did though?” says My Lawyer. “You consulted American Dad about what there was for breakfast. You should have just spoken to her.”

“If you don’t tell her what to do,” says American Dad, “she can’t do her job properly. You just have to be clear about what you need.”

Say what you like about white middle-class men, but they’re very good at giving instructions on how to give instructions.

I have chosen to sleep in the same room as my children, claiming that it will be easier for me to be on hand for any jetlagged confusion. Really, the reason is straightforward parental Stockholm Syndrome; I imagine the five-year old waking up, panicking about where he is, and where I am. He never does. My Lawyer takes the guest room with the ocean view and he tells me, in a doomed bid to lure me away from my captors, that is it quite spectacular. The sun rises at around 6am in Panama, every day, all year. The American Family sleeps without drawing the curtains; the sun is their alarm clock. They live a life unpunctuated by seasons.

“It takes some getting used to,” says American Dad one morning, as we drink the coffee that has been waiting for us since sunrise.

I ask for the five year old’s breakfast.

The Maid often talks to her family on her headphones whilst she prepares food, or she sings softly to music as she irons. Sometimes I panic that she is talking to me, and I bolt towards the kitchen, only to realise halfway that I’m not being conversationally engaged, and so I style out a strange bee-dance in front of the kitchen doorway whereby I inspect the walls and the ceiling before retreating back to the sofa and Lena Dunham’s diary:

-Do you know what your problem is? You are a bitch.

The Maid washes and irons everything. We can give her laundry at any point during the day, and by evening there it is, in an ironed pile. The pile of ironing is so expertly presented that it looks like a cartoon, or an advert. The towels are always fluffy, and the beds are made in a way that I thought only my mum could do. Her favourite of us all is the five year old, which isn’t surprising, because the five year old is Baby Groot turned human.

“How d’you reckon he’d handle being put to bed by The Maid one night?” asks American Dad, pointing at the five year old in the pool. “We could go out early, and catch the sunset before dinner somewhere. Your call,” he adds.

“Shall we see how he seems in a couple of days?” I ask breezily. I do not look at My Lawyer, who knows that my breezy voice is the one I use when I am pretending to be normal. I already know that in a couple of days, I will pretend that it is normal for A Maid to put my kids to bed whilst I’m watching the sun set over the ocean with a fancy drink in my hand. I hide behind my book.

On Monday morning, American Mom goes on a work trip and the American Kids must go to school. School buses arrive outside the building at 6.30am sharp. American Dad takes them downstairs and waves them goodbye – it will take them forty-five minutes to get there, mostly because of gridlocked traffic. By 6.45am, American Dad is back upstairs on the twenty-third floor, a coffee in his hand, surveying the ocean.

“No, listen,” he says, indicating to the space around him. “You’re not normally here. Kids are gone, The Maid is getting on with it. Wife away. This. Is. It.”

And suddenly, I’m reminded of a song; an earworm that became the soundtrack to the loneliness I felt during early parenthood, when everything was the same, every day; when I rose at dawn with my first baby, the unrelenting centre of my universe, prising my eyes open with his sunbeam fingers and the promise of another long day. I’m talking, of course, about Grampy Rabbit’s Boat Song:

THE SEA, THE SKY, THE SEA, THE SKY. Second-best eyebrows in show business, Grampy Rabbit. No other song better encapsulates the beautiful abyss that is parenthood. It takes some getting used to.

We go out for dinner a few days later. We order pizza for the kids and leave The Maid to put five children to bed. I forget all about them, actually. I don’t think about the logistics of settling five children between the ages of five and ten. I don’t wonder whether she will give them a cuddle, or whether she will stroke their hair a little, or whether she will shut the door when they want it open, or whether she’ll know that the five year old has his own special toothpaste. But when I creep back into their room at midnight, I am still amazed to see them all there, in pyjamas, sleeping soundly. It feels like a miracle. I climb into bed. One of my children farts.

-My mother wished that she’d written everything down.

I’m sure she wouldn’t have written everything down. Would she?