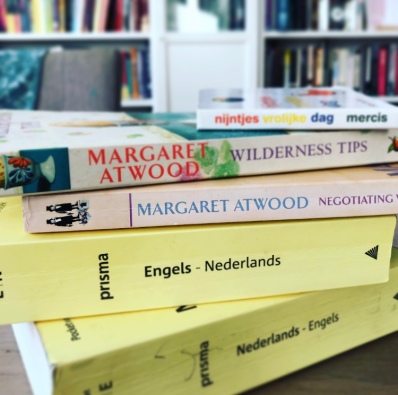 It hasn’t always been this way, Amsterfans. Sure, now I’m gracing the Dutch News culture section, riding a celebrity bakfiets (#stevethebakfeits), blogging to many tens of people internationally (TWO PEOPLE IN PANAMA), being invited to sex plays and developing an autobiographical film starring Olivia Coleman, much to the disappointment of two-eyed Janine from The Handmaid’s Tale.

BUT! Twenty years ago, my life was a very different story. I was eighteen years old, living in Plymouth with my parents and dating the lead singer of a covers band that toured COUNTY WIDE. Yes, COUNTY. WIDE. I don’t need to remind you – I’m sure – that Devon is the third largest county* in the UK!!! COUNTY WIDE! Yes, okay, most of the county in question is field. Sometimes you have to travel a very long way simply to find another living person. But for the purposes of accurate pub-doorway chalk-board promotion, county wide is county wide.

I was a student, a waitress and occasional singer with my then-boyfriend’s county-touring covers band. I don’t remember any of the numbers I sang, because I was usually very drunk, and/or trying to stop my county-wide-covers-band-lead-singer-boyfriend chatting up other girls. Man, this film is writing itself. Two-eyed Janine from The Handmaid’s Tale, you’re up for Young Me. You’ll need prosthetic acne.

What I wasn’t doing twenty years ago was revising for my A Levels, one of which was in French. The slow-motion car crash that was my French Oral Exam has been my recurring nightmare in times of high anxiety ever since; waiting outside the exam room with, under the given circumstances, remarkably little French. Hoping for sudden-onset appendicitis, or a bolt of lightning upon the school, or a time machine. “I wish you well,” wrote my French teacher in my final school report. I’m not sure she meant it. I scraped a C in French (more than I deserved), and was unceremoniously dumped by the county-wide-covers-band-lead-singer-boyfriend a few months later. I wish him well. Of course.

It is possible, therefore, that I carry with me some emotional baggage as I reattempt a second language. The nine year old and the seven year old are now effortlessly fluent, and the four year old isn’t far behind. That’s what immersion does for you. Immersion, and a young brain that glitters like a christmas tree with neural connectors, uncompromised by the demands and disappointments of adulthood. Enjoy it while it lasts, kiddos.

The Dutch course that I’ve been following – six months’ free tuition up to A Level standard, supplied by the municipality of Amsterdam – is coming to an end, and we have exams. This was a surprise to me, although apparently it was clearly set out in the (Dutch) terms and conditions that I signed at the beginning of the course.

We are given exam schedules, which include mock exams. Revision ensues, in several forms. I have a dream in which I’m searching for my childhood home on a street that I vaguely recognise but have never lived on. The nine year old and the seven year old appear in the dream, beckoning me into a house. A storm begins, and I can’t hear their voices. My legs stop working and I wake up exhausted and a little depressed; how bitterly disappointing to have such a transparent subconscious. I try and practice my Dutch with the kids after school, but they protest. “This is the only time we can talk English, Mummy,” says the seven year old. She means: Mother Tongue. Sound normal to us, Mummy. Everything else has changed; you may not.

I sit my listening exam and catch maybe 50% of it. Each fragment is played to us three or four times; each time, the same sentences zip themselves up into impenetrable pods. I knew this would happen, which is maybe why it does. Straight after my listening exam, I go to the toilet, choose not to cry, and then I go back in to the classroom to sit my reading exam. It’s a doddle. Reading Dutch is pretty easy. Maybe I don’t need to speak it. Maybe I can just exchange notes, like at school. Are you noticing a theme?

My mother and Margaret Atwood sabotage my exam schedule. This isn’t a dream. The two most influential women in my life choose to visit Amsterdam on the same weekend, slap-bang in the middle of my fortnight of exams.

“Just pretend I’m not here!” says my mother, unpacking bricks of cheddar from her suitcase.

Now the clocks have changed, it’s dark outside by 4.30pm. Our windows are being repainted and our apartment is engulfed in scaffolding. Huge Dutch men pretend not to peer in at us as they paint. Some days we have to leave the windows open, for the paint to dry. The children climb all over my mother, and I sit in my coat and scarf at the table, translating. Pages fall out of my dictionary; sadly, not directly into my head.

Margaret Atwood is in Amsterdam to give a lecture entitled, Greetings, Earthlings! What Are These Human Rights Of Which You Speak? I exercise my remaining rights to have some time out on the weekend, leaving My Lawyer, my mother and my children to their own devices: laptop, iPhone and Amazon Fires respectively.

I arrive forty-five minutes early for Margaret Atwood, and I loiter outside the lecture theatre along with several old ladies. I listen to a Dutch podcast on my headphones and understand almost all of it. Another small old lady shows up and zips towards a side door. It is Margaret Atwood herself, just casually being Margaret Atwood, as if it’s no big deal at all. My palms sweat. In my bag, I have two books for her to sign; Wilderness Tips and Negotiating With The Dead. I could not find my 1997 A Level student copy of The Handmaid’s Tale, which is probably just as well; Margaret Atwood might read my annotations (“SIGNIFICANT,” “DOUBLE MEANING”, “SHE’S THINKING ABOUT THE PAST”) and justifiably refuse to sign it. Being the girlfriend of the lead singer of a covers band that toured county wide did not lend itself well to intellectual curiosity. Shocking, I know.

Many more people arrive, and the old ladies and I find ourselves at the front of a politely eager, female-heavy crowd, slowly yet intently toeing forward, fuelled by lattes, intellectual curiosity (finally!) and many lifetimes of bitter passive-aggression. To say that I use the old ladies around me as a human shield wouldn’t be entirely accurate, but neither is it very far from the truth.

“There are so many women here!” says one lady behind me.

“Oh yes,” he confirms sagely. “I absolutely expected it.”

Margaret Atwood delivers her talk via an alien who has assumed the identity of a small Canadian lady. The alien assures us that, despite all evidence to the contrary, Earthlings still have a whiff of a chance to save themselves. The aliens wish us well. When the alien has said all it wanted to say, Margaret Atwood returns to the stage. She tells us that there are four stories in the world:

On the way out of the lecture theatre, clutching my books, I ask a doorman where the signing session will take place.

“The signing session is only for VIPs,” he says, not unkindly. “Are you a VIP?”

“No, I’m not,” I say, and I put my books away. I am an ordinary person, living in ordinary times. Depending, of course, on your frame of reference.

I sit my speaking and writing exams. They go surprisingly well and reveal two things: firstly, that I have reached approximately A Level standard in Dutch. Secondly, that A Level standard isn’t the apex of linguistic mastery that my subconscious had led me to believe. To put it another way: I have put the recurring nightmare to bed, but I still can’t speak fucking Dutch. However, my teacher tells me that I am eligible, on account of my results, to sit the higher level of reading and writing exams in a couple of days.

“This was strange, though,” she says, pointing to my listening exam result. “What happened here?” I lean over to see: 70%. More than I expected; round about a C grade at A Level, I guess. I’ll take it.

Two days later I wake up feeling horribly ill; shivery, washed-out, exhausted. My Lawyer takes the kids to school and I stagger in to Dutch class to sit the higher level reading and writing exams through a flu-ish fog. I zone out from time to time. My palms sweat and stick to the paper. My teeth chatter and ache. I forget the Dutch word for building. This is Exam Burn-Out, I think, as I spell my own name wrong. Finally, I’ve done enough work to earn it. What a feeling! What a shitty fucking feeling!

“Time’s up,” says our teacher, after two hours.

“I didn’t finish,” I mumble through snot, adding, unnecessarily: “I think I’m sick.”

“Beterschap,” says my teacher as I head out of the door. Which means, Get well soon. Or: I wish you well.