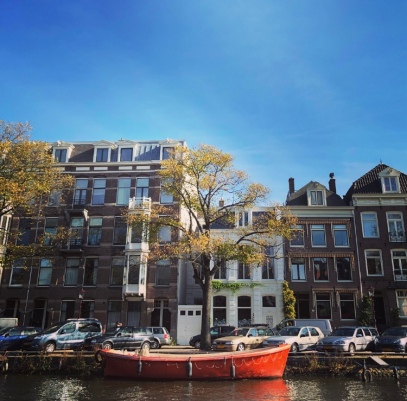 In my privileged capacity as Tulse Hill’s greatest export to Amsterdam, twice Mumsnet’s blog of the day, guardian of #stevethebakfiets, fair-weather Instagrammer, diarist, documenter of disaster, dealer in schadenfreude – ALL my stock is in schadenfreude, that’s my only horse in the race, if you start to yearn for some actual useful intel about Amsterdam then I am FUCKED, I tell you, FUCKED – I am often, these days, on the receiving end of a phenomenon that I believe is called reaching out. The people who reach out and find me in their unwitting grasp are public relations consultants, and they have googled Amsterdam Bloggers – or, worse, Amsterdam Mummy Bloggers (Christ) – and, look! They found Amsterfam! Here’s a woman with 1.4 more children than average. She’s made some weird decisions. Let’s see what else she’ll do!

It’s usually clear that they haven’t read the blog. No, I won’t review a baby car seat. I don’t have a baby. Or a car. I am not the droid they are looking for. It’s a little depressing, though; mothers only appeal to other mothers, and mothers who write? Well, you’re WordPress’s bread and butter, ladies! You’ve got some stuff to say? Say it into the internet! Or scream it into your pillow. Your choice. No-one else really cares.

But every now and again, something lands in my mailbox that makes me think I won’t end up having a fourth baby just so I can review chamomile-infused teething earrings, or womb-music CDs, or pelvic floor rehabilitation retreats.

Okay I’m going on my own. 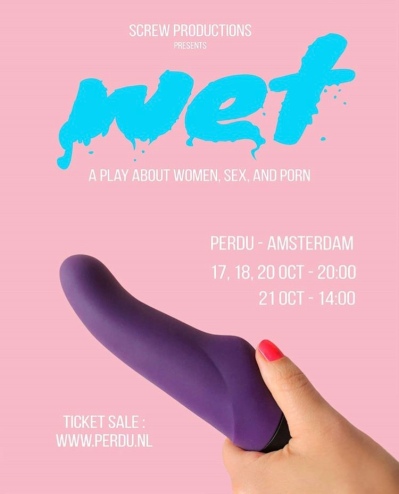 As I cycle into central Amsterdam on opening night (OPENING NIGHT! NUDGE NUDGE! Because, you know, SEX!), it strikes me that this will be the first time I’ve ever been to the theatre alone. I’ve never even been to the cinema on my own. It’s strange, that these passive activities are normally associated with accompaniment. Since my father died, my mum has been to countless plays and films on her own. She knows all the tricks to get the cheap tickets; what time to phone, where to go, which days are usually available. She takes herself off into central London, which she now knows like the back of her hand. She takes in an afternoon show, thinks it’s good or shit, and then she’s home in time for Coronation Street. Tell me you’ve got better retirement plans?

The theatre, Perdu, is at the bottom of De Wallen – the red light district. The sex for sale is a few streets up from here, and as I lock up my bike I see families walking in that direction, to tick it off on their Amsterdam To Do List. The odd lone man wanders in the same direction; he also has a To Do List, but it’s probably shorter. I look down at my feet and find a silver turtle, which I find incredibly funny. It’s just as well I came by myself. (AS IT WERE! HAHA! YOU KNOW, SEX!)

Waiting for the show to start, I realise that I am the only person in the room who has, um, come on their own. This, I realise, as I sit drinking bad white wine, is why we enjoy company at the theatre. The vulnerability of being your own date, the apparent audacity of pleasing yourself, is embarrassing. I think again of my mum. What does she do at this bit, when the theatre is filling up around her? She will always be early, as I am now, for fear of last minute disruptions. People leave gaps either side of me, assuming that someone will join me. Does this happen to my mum? A funny thing, about being alone – you are afforded more personal space than you need, as if you are contagious.

This is where pornography exits, stage left. Because it quickly becomes apparent that pornography as we know it – spanked, shaved, oily and badly acted – is predominantly made by and for men. The women are sex-bots, tongues hanging out of their mouths, nymphomaniacs, begging for it. Men looking for pornography do not want a challenge; there can be no suggestion of failure, because you know what failure means? VULNERABILITY! And you know what doesn’t like vulnerability? PENISES!

But do you know what turns women on, as Holly and Sophie discover? VULNERABILITY! Messy sex, not knowing what will happen next, telling each other what you like, what you don’t like, having these desires accepted and fulfilled by a sexual partner who is listening to you. It doesn’t mean you have to cry, or be in love, or even know each other’s name; it means not having to pretend that your labia are extensions of your clitoris. It means embracing mistakes and clumsiness in order to get to a place that feels good. It means intimacy, with or without emotional dependency. The writers of Wet, Bryony Cole and Grace Carroll, discussed pornography with groups of women whilst researching for the play, and their conclusion is the same one that Holly and Sophie come to – female arousal is hard to bottle; it’s ours, and ours alone. Sorry, fellas. No package deliveries today.

The house lights come up, and this the best bit about going to the theatre on your own; no-one immediately says to you, “WHAT DID YOU THINK?”, when you’re still not quite sure what you think and you also really need a wee. 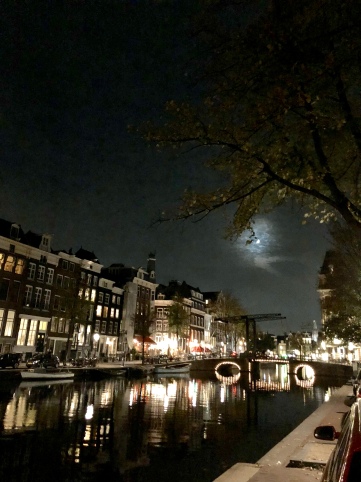 Some would say it is strange to be thinking about my dead father after watching a play about porn; others would say it’s inevitable. Either way, I’m at Museumplein before I know it, smelling the Heineken brewery on the air and dodging drunk Brits and rich Dutch people walking their dogs before bed. I cycle past the giant Iamsterdam letters in front of the Rijksmuseum, and then I think I should have stopped to take a photo – the night is beautiful, and the letters may shortly disappear in a move to dampen down tourism in the city. I’m annoyed with myself that I didn’t stop.

Two minutes further on, I turn back. You can do that, when you are on your own. You can please yourself. No one’s watching. 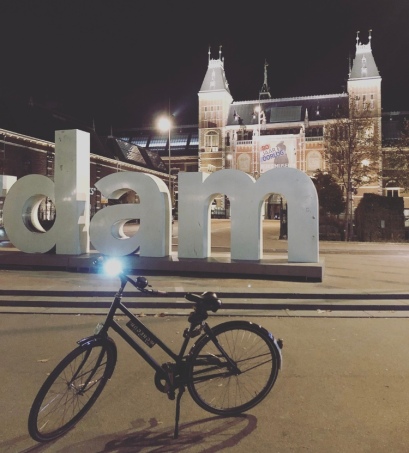