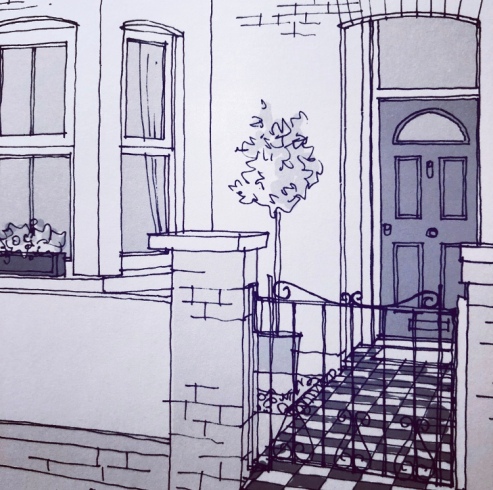 “I’ll slow the car down,” whispers my mum, “and then you can just say SEE YOU IN A MINUTE and jump out and we’ll carry on in the car and he’ll never realise where we were.”

I am in the passenger seat of my mum’s car, which used to be my car, driving through South London on the way to someone else’s home, which used to be my home. We have four lodgers there now – is that four different homes? During our first year in Amsterdam, I used to check how it was “at home” on my trips back to London. Now I check “The House”. When we are feeling grand, we call it “The London House”, as if there are many others; the country house, the French house, the ski chalet. Within certain expat circles in Amsterdam, our lack of a second or third house is notable. We’re in danger of being downgraded to migrant, although forever exempt from immigrant status on account of, as far as I can see, an abundance of pheomelanin in our skin and a recognizable alphabet. Aren’t humans strange?

“Where are we going?” says a small voice from the back of the car. We have dispatched the seven year old and the nine year old at friends’ houses, but the four year old is with us, and he is suspicious.

We turn on to our old road, and my mum, who once told my (then) two year old brother that she was going shopping and then went to Australia for two weeks, slows down. “Go!” she hisses. “Go!”

“Where are we?” asks the four year old.

The four year old considers me, brown eyes narrowing beneath more eyelashes than he needs. He has a small mole high on his cheek. He is a film star, and I’m very sorry for all the other children out there who are not film stars, but that’s just how it is.

Suddenly, he looks outside, directly at The House, at its bright white exterior and gregariously green door. We have a portrait of The House hanging above our dining table in Amsterdam; an illustration, black and white, given to me by my West Norwood Women the day before we moved, in order to make me cry and therefore securing a guarantee of our ongoing friendship. Very clever women; very cunning. In Amsterdam, the four year old looks up at this black-and-white picture occasionally and says, “Do you remember that story, Mummy? Of us at the green door house?”

But now, in front of The House for the first time since we moved, he casts his eyes over it before looking up and down the street. Then he says, “Which one are you going in?”

He looks at the green door. My mum audibly inhales. The four year old asks, “Who is in there?”

“Some people who live there,” I say.

He studies it through the window whilst my mum twitches at the wheel like the driver of a getaway car.

“Okay bye,” says the four year old, and that is that.

My mother speeds away from the scene of the crime and I approach the green door anxiously; it isn’t pleasant, going back. Our tenants are lovely people; four sharers, professionals, mid to late thirties. This is their home, and the feeling of imposition as I ring the doorbell is not insignificant. As I wait for an answer, I look up to see plaster is crumbling away from the porch. Job One, I think.

Two of the tenants are in, and we chat for a while before I wander aimlessly around their home. This is An Inspection. I have absolutely no idea what I am supposed to be looking for. I try to obviously not look at their personal belongings, which is a difficult act to convey and results in a thorough investigation of ceilings. I survey the cracks, palm-reading. Nothing has changed, there’s life in the old girl yet.

“I could draw these cracks blindfolded,” I say to one of the tenants, as we stare up at the hall ceiling together.

“I hadn’t even noticed them!” she says.

Anthropomorphism is a weakness of mine (or a skill? No?), and I find myself hoping that The House didn’t hear this; it’s bad enough, isn’t it, that the four year old has already forgotten her? Still, it could be worse. The tenants have planted vegetables in the garden and they have a cat. These are things that, long ago, I thought I might do, some day, in The House. The tenants are grown ups, and I think The House likes it. I collect the post, and a list of repairs that need to be taken care of, and I leave quickly, later than I should have, and sooner than I would have liked.

Outside, I am standing in front of the house taking photos of the crumbling porch, when I hear a knock on a window. I look up at The House, and see nothing. I hear the tap again, and turn, looking down, to see Alice. Alice is – was – our next door neighbour. She lives alone in the basement flat of a tall house which is owned by one of the largest housing associations in London. Alice is in her eighties, voted for Brexit and drinks coffee made from sachets. She only wears black; it is her favourite colour. Alice points towards her front door, and disappears. I had not planned on calling on anyone during this visit, not out of indifference but rather a paralysing anxiety about leaving someone out. But here I am now, descending the steps down towards Alice as she opens the door, squinting up into the daylight.

“I have missed you!” she says.

I stoop down to give her a hug, but fragility emanates from her like a force field, so it is not so much an embrace as it is an encircling, like a ring around a planet.

We go through to the front room. It is dark; only the top third of the window is above pavement level, and heavy net curtains filter the only daylight that makes it. Alice turns her television down but not off, and continues to watch Pointless over my head as she talks:

“I was so scared the cancer had come back because when I came back from the shops the other day I was good for nothing. You know I only go down the road these days but even still, there was nothing there, no energy. I went to bed at 8pm which isn’t like me at all. I started coughing and I coughed the whole entire night. I put a pillow over me head because I didn’t want to wake Lyn upstairs. Sometimes I hear them, so they gotta hear me, right? All night, I coughed. I thought: it’s back. It’s back. I got up at 5.30am, but I always get up at 5.30am so that’s normal. That’s just me, I get up at 5.30am, that’s just how it is. I waited for 8am because that is when you can phone the doctor, and I spoke to the doctor who said a paramedic will come. He did come at 2pm. 2pm!”

She pauses for a reaction. I’m not sure if 2pm is meant to be early or late. I widen my eyes, to cover all bases. She continues.

“I know! So at 2pm there he was, taking my particulars, saying I had a temperature and a chest infection.”

“What did he say about the cancer?”

She reaches for a folder full of letters, and reads out to me the dates and intentions of her upcoming medical appointments for the next six months. Eyes, knees, lung, bowel. Eyes again. “They take my particulars every time. Ask the same questions. They never remember me. How’s that Amsterdam then, are you liking it?”

I show her photos of the children, and she lingers on the photo of the seven year old. In it, the seven year old knowingly half-grins at the camera, hair arranged carefully over one shoulder, arms crossed like a child star from the nineties.

Alice raises her eyebrows. “She’s still full of it, is she?”

Alice smiles. The seven year old was always her favourite.

We talk a little longer. I ask her if the housing association have sorted out the mould that covers her bathroom wall yet. She tells me that she doesn’t want them to come: “They always leave so much mess.”

Eventually, I tell her that I have to go.

“I do miss you all,” she says again. “Life these days. Life these days. Is just so, so, so awful. The time when it was best, when the world was the best, was when I’d just finished school, before I got married. We was in Clapham. We all knew each other and all our doors were open! I know you hear that all the time, but they really were! Open! Now, I look up there,” – she points up to the window, to her one third of light – “people go in doors, close the doors, then leave again, off to do whatever they do. I see them. Back and forth.”

In the hall on the way out, I notice an old, black and white photograph of a group of happy women.

“That’s my mum!” says Alice, pointing to a sturdier version of herself at the front of the photo. “She was a great mum. She didn’t hit us. Never. She had this stick that she kept on the table, to threaten us, but she didn’t never use it. But once,” Alice lights up, “one morning, I was out in the square – we had this little square in front of ours, where we all messed about – and mum called me in to get ready for school. I don’t know why, but I wanted to stay home, so I ran in past her, didn’t I! Scarpered past, and she got the stick and thwacked it at me as I was gallumping up the stairs! Well, it got me, didn’t it. Came up like a welt. A straight red line, it was, on the back of my leg. She rubbed it so careful with Vaseline and put me to bed and said I didn’t have to go to school. She brought me milk and whatever else I wanted. She was a great mum.”

It’s comforting to say goodbye on this note, with Alice thinking of home. It makes it easier; for me, that is. I leave quickly, later than I should have, and sooner than I would have liked.