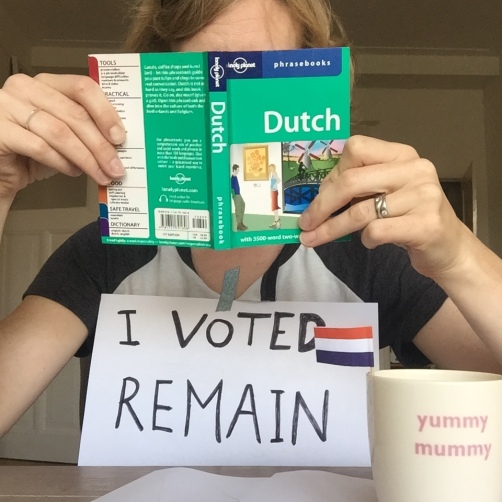 It is Tuesday night in Amsterdam, and I find myself sitting at a table with eight strangers. Nine different nationalities are represented, something like a small-scale Model UN. It is my unhappy duty, both in this room and Amsterdam as a whole, to represent the United Kingdom. I am relieved to see America sitting on the other side of the table; just like misery, international humiliation loves company.

But here in this room, we all have the same agenda, and the same limitations. This is Dutch class, Beginners 1. We are all as shit as it is possible to be at Dutch. Universal incompetence is a real leveler. We might as well be naked and sobbing. Maybe that’s just me.

Our lingua franca is quickly established as English, due to centuries of linguistic imperialism. America and I glance around, apologetically. Colonialism is the worst! We take it in turns to introduce ourselves.

Brazil is learning Dutch so he can talk to his neighbours. France has just had a baby, and the experience of giving birth with a Dutch midwife on hand would have been easier if some communication had been possible. Italy, Taiwan and Australia are all working with more and more Dutch colleagues in some very impressive and intimidating careers.

Introducing yourself as a stay-at-home parent in a room full of professionals is about as self-affirming as outing yourself as British in a progressive European city whilst Brexit negotiations go from bad to worse. How lucky I am, then, to straddle both of these lame donkeys at once. Donkey in Dutch is ezel. It sounds a bit like a Dutch person saying asshole. I’m just saying.

“Well, I am from London,” I begin. Identifying as a Londoner pretty much absolves you of Brexit affiliation, although it is a clear marker that you are almost certainly an ezel. Which is fine; I’d rather be a London ezel than a Brexit asshole.

“My kids are starting Dutch school,” I say, “and so I want to keep up with them, and explain to other parents at the school gates that I voted to Remain.”

France laughs. Everyone else looks confused. The silence is rather too long for me to explain that I mean I am AGAINST BREXIT AND I WISH I WAS DEAD.

“Also,” I plough on, “I just think it’s polite, to speak the language of your host country. It’s respectful.”

“It is hard though,” frowns Brazil. “I have been here for nearly five years, working in an English-speaking company.”

This is not going well. I have alienated my classmates politically and socially in the first five minutes.

“Of course,” I say, reverting to type, reaching for the domestic cloak of invisibility and wrapping it around myself again. “I’m just at home with the kids, so it’s easier for me.”

Just at home with the kids. It’s as if I climb into the laundry basket to hide. It is no easier grappling with the identity of a stay-at-home parent in the Netherlands than it was in Britain; there are less full-time workers here, but there are more part-time workers; in fact, more workers overall. It is estimated that around 75% of women work here. This does not include the English woman you read before you, who is too busy offending strangers and is, in any case, qualified for nothing.

The idea is, we start with the vocabulary we need, and build around it with ever-greater layers of complexity, like an onion of language. And as we slice into this onion, we are very likely to make the locals cry. The Dutch word for onion is ui. It’s pronounced OW. I’m just saying.

We are all partnered up to practice saying where we are from. I am paired with Italy.

I learn that I am from the Verenigd Koningkrijk. I cannot say it, but this does not worry me, because it’s not something I plan on advertising.

You might think that I am over-egging the Brexit shame. That people couldn’t possibly be pointing and laughing at us in the street. Let me be clear: last week, my Dutch neighbour pointed and laughed at me in the street.

“You voted for it!” he exclaimed.

Over the course of the following week, I test out some phrases. Most of these phrases involve ordering and paying for coffee. Usually the barista replies in English, but I plough on, regardless. In Vondeltuin, one of the main cafes in Vondelpark, the staff come to recognise me as the latte addict who is trying to learn Dutch, and occasionally loses her three year old. They are very patient with me, repeating slowly. They like it that I’m learning Dutch – a surprisingly small number of foreigners who live here actually do learn the language, and so I quickly become accustomed to praise from Dutch people, until I drop the three year old at his very Dutch voorschool one morning and spout off a few of my trusted phrases.

“I’ve started my lessons now,” I gush to Bernadette, the teacher. “I’m trying to learn Dutch.”

“Well yes, it is right,” shrugs Bernadette. “I don’t go to England and expect you all to speak Dutch.”

What do I want, a fucking chufty badge?

I go to Specsavers, to collect my new contact lenses. Specsavers in the Netherlands is called Specsavers. I experience that frisson of excitement that only Brits seem to express when recognising a brand abroad: “They’ve got SPECSAVERS Mum! It’s EXACTLY THE SAME! And….. BAKED BEANS!”

(They actually do not have baked beans here. I’m just saying.)

The woman looks at me blankly.

“Verzameling?” I repeat, showing her the bit of paper onto which I’ve scribbled my findings from Google Translate.

“Oh, no, this is the wrong word,” she says in perfect English. “You need ophalen. To pick up.”

Right., I see. Verzameling is the wrong kind of collection. I’ve spoken as if I collected contact lenses as a hobby. A contact lens enthusiast. Wanna come back to mine? I have this amazing collection of contact lenses. It will blow your fucking mind. I’ve been collecting contact lenses since 1994. I still remember the moment when I secured my first semi-permeable. Still in its original packaging!

So this is what they mean by feeling foolish and vulnerable. But our teacher also told us to “make success tangible”. The aim wasn’t to complete the transaction in Dutch – it was to try. I’ve been a stay-at-home parent for over eight years now. In that time, my children have provided nothing in the way of an appraisal system that I can work with for the benefit of my self-esteem. There is no incentive scheme, and very little positive feedback. I am my only cheerleader. I’ve been making success tangible for myself for the last eight years. (The aim is to COOK the food. They don’t have to like it. Or even eat it. If I’ve cooked it, JOB DONE.)

Embracing vulnerability is the only way to grow as a parent or a language student. There’s nothing to be gained in claiming to be strong and stable. I’m just saying. 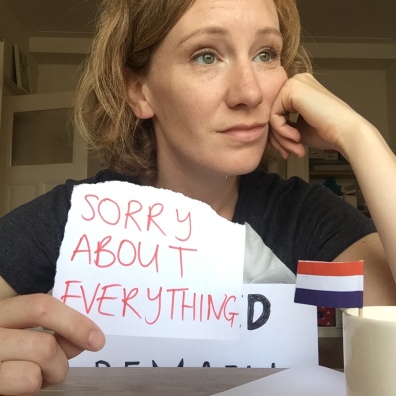