By London Wanker standards, my London goodbyes were pretty average; on Saturday night I drank, cried, and was sick behind a tree, then on Sunday I went to a spa and ate, cried again and fell asleep five minutes into a massage. I don’t like a lot of fuss. I slipped away, sylph-like, into the night, like Katie Price on a hen do.

And so we are here.

Amsterdam. Day 1. It is a Tuesday morning. My Lawyer takes the kids down for breakfast and I enjoy my first lie-in for three months. I doze, occasionally stirring to the sounds of Amsterdam rising: heavy wooden doors, clinking bike chains, barking dogs. My Lawyer brings me tea and porridge in bed. After three months of solo parenting, I feel like I have been rescued by nuns. I take deep breaths. This is why we are here, I think. A balanced life.

“Right, I’m off,” says My Lawyer, throwing off his habit. “By the way, the baby needs a poo. Have a great first day!”

And with that, I’m out of the frying pan, and into het vuur. 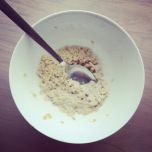 My porridge goes cold. The kids get dressed, and the three year old continues to not poo. We trot down the 45 stairs that take us down to our front door. These stairs are still a novelty; we are all enjoying living up high. Our apartment feels like a treehouse.

“Will we cycle?” asks the eight year old, excitedly.

“No, we’re walking,” I say, studying google maps for the nearest bank.

The kids bolt down the street.

The eight year old obeys, the six and three year olds continue to canter away.

I apologise to the six year old and we all pull ourselves together. I look around to get my bearings, and see our house about a hundred yards away. The three year old’s knees are bleeding, but it feels somehow defeatist to go home for plasters.

“We didn’t bring a list,” worries the eight year old.

I hoist the bleeding three year old onto my hip and off we go.

The first bank does not take my card.

“Is it because of Brexit?” asks the eight year old.

“Probably,” I reply, as we traipse down the road to locate another ATM. The three year old is getting heavy on my hip, and so I transfer him to my shoulders. Somewhere in South London, my chiropractor shivers.

We find a more forgiving ATM. Holding the three year old steady with one hand, I order money with the other.

“I’m sure that’s far too much for a toilet seat,” says the eight year old, nervously.

“The days of austerity are over,” I say, stuffing the cash in my wallet. In truth, this is still holiday financing; who knows when I’ll get to an amenable ATM again? I won’t get my Dutch ID number for another two weeks. Until then, I’m a tourist, and must fight the urge for hair braids, landmarks painted onto pebbles and poor caricatures of my gurning face.

HEMA saves our upholstery, providing baby toilet seats for €5 each. We take two, and some cat hair clips, and a butterfly headband, and Jip and Janneke plasters. The cashier looks at me oddly when I pay, and on the way out I notice in the reflection of the door that I have the bloody imprints of the three year old’s knees on either cheek. I shrug; this is the closest I’ll ever come to contouring. I blend in the blood and look better than I have done for months. Things are looking up.

We stop at Bagels and Beans, for food and first aid. Bagels and Beans is a Dutch chain that does pretty decent bagel-based fodder and a more-than-passable latte. We sit outside at a wobbly table over-looking a canal, and I patch up the three year old whilst hissing at the big kids to be still. In the hour that we have been out of the house, I haven’t witnessed a single act of familial tension outside of our own docu-sit-com, so in order to blend in, I’ve no choice but to mouth incomprehensible threats at the kids. The three year old is on my lap, admiring Jip on one knee and Janneke on the other. I cannot reach my coffee.

Two sophisticated Dutch grannies settle at the table next to us, with a baby in a buggy. The three of them exude a surety that one wouldn’t normally associate with babies or old ladies. Whenever the noise from our table surpasses a dull roar, one of the three glances over.

‘PLEASE, Mummy,” the six year old is saying. “I just need it for one second-“

“You are not having my phone!” I say, my voice sing-song soft and my eyes narrowing. “We’re eating!”

“I’ve finished! It’s just that I need it for my DJ show-“

“There IS!” flounces the six year old, and the ferocity of her flounce catches the side of our wobbly table, tipping the contents of the table towards me and the three year old. I yelp. Both grannies and the baby all look at us.

The kids sit in a stunned silence. The grannies’ baby watches me walk to the counter. I glance back at him, defiantly, and he finally looks away. Maybe it’s the blood contouring, I wonder, as I pay. Yes, baby. I wear the blood of my infant. This feels like a small victory, which carries with it, like many parenting triumphs, the vague markers of psychological disturbance. At moments like this, squint your eyes and take the win; they are few and far between.

When I return to the table, I’m a little horrified to see that my children are talking to the grannies and the baby.

“HELLO!” I say, too loudly. I do not make eye contact with their baby. In another universe, I still have the upper hand there.

“So well behaved!” says one of the grannies, in well-pronounced English.

I look around, and see only my kids. “Them?” I indicate, baffled.

“Just one or two hiccups!” laughs granny number 1. I wonder if she is drunk.

“We were just saying to each other,” says granny number 2, “That we are two here, with one baby, and you are one mum with three!”

“Well, that is true!” I say, peeling children from my legs. “There’s no denying that!”

Yeah, I think, as we leave. She’s drunk.

On the way back to the place we now call home, we swing by our local shop, called Jumbo. Jumbos are everywhere, like Tesco. I don’t know whether to call it Jumbos, or The Jumbo. I’ve promised the six year old beef stew for dinner, but there are many different selections of meat, and each requires the patient cooperation of Google Translate on my iphone.

“I need a wee,” shouts the six year old, suddenly desperate, hopping around.

I glance at her, and then back at my over-worked iphone, which has tired of provincial translations and is now displaying thinly veiled profanities. 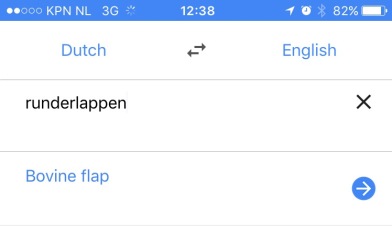 I grab the bovine flaps and off we go.

Three hours later, the three year old has finally taken a shit, and is enjoying the kind of enlightenment that only the recently-constipated can fully appreciate. The six and eight year olds are reading on the sofa. The air is rich with the distant aroma of bovine flap stew. My Lawyer arrives home and surveys the scene of domestic bliss with warranted suspicion. He makes no sudden movements.

“We bought the baby a toilet seat,” I shrug, stirring the stew.

“Well, there’s lots of time for exploring later,” he says. “What’s for dinner?”

“Bovine flap stew,” I say, flaking the last of the dried blood from my cheekbone.